The Football Association [The FA] has today launched the ‘Pledge of Positivity’ which asks parents and spectators involved in under-18s grassroots football to commit to creating a more positive environment at matches across the country.

A recent survey conducted by The FA and Nielsen found 88% of over 1,000 grassroots participants cite parents as a driver of disrespect in grassroots football.

To have an impact on this off-pitch behaviour, The FA has launched the Pledge of Positivity, encouraging those on the side-lines to support all players involved and respect referees, coaches and other spectators. The Pledge is based on The FA’s RESPECT behavioural code of conduct which seeks to improve behavioural standards in football. 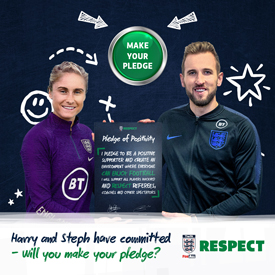 England captains Steph Houghton and Harry Kane are the first two people to make the Pledge of Positivity, encouraging others to follow suit at www.TheFA.com/Pledge

The two skippers also penned a joint letter to parents and spectators, which was painted into the touchlines at their childhood clubs; Harry Kane’s Ridgeway Rovers, Essex and Steph Houghton’s Boldon Girls, South Shields.

Man, 81, held in Scotland over sexual abuse in youth football

FREE Activity Pack – Design and Colour in your own Trophy

Albie 9 pays tribute to his father who passed away by being a mascot at there favourite club.

Sin Bins, what do YOU think…..

The letter highlights the importance of positive support and the role it played in their own footballing development, from the grassroots game all the way to Wembley. To watch the full launch video involving Houghton and Kane, click here.

England men’s captain Harry Kane, a father of two, said: “As parents and spectators, it is our job to make sure that children enjoy playing football. The pitch should be a place of support and encouragement. Youngsters should never feel pressure or intimidation from the side-lines, so I’m delighted to add my name to the Pledge of Positivity and I’d like to encourage as many people as possible to do the same.”

Lionesses captain Steph Houghton added: “Positivity is essential in football. It’s important to create an environment where everyone enjoys playing. There are small things you can do on the touchline – like applauding good play from both teams – that has a big impact on young players.” 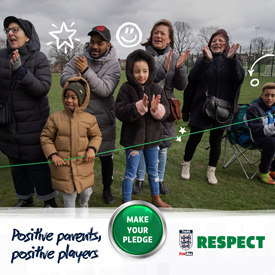 The FA’s Chief Executive, Mark Bullingham said, “Having coached grass roots football for the last five years, I’ve seen first-hand the huge impact that parents on the side-lines can have on players from both a positive and negative point of view.  It’s no surprise that kids play better in a positive environment and our research has confirmed this impacts 90% of players.  It’s crucial that we create an atmosphere where players are encouraged rather than abused, for their enjoyment of football as well as their mental health.  I urge others to join me in making this pledge and showing their support for kids’ football.”

The FA’s Respect campaign was re launched ahead of the 18/19 season [having been originally launched in the 2008-09 season] with a new mantra of ‘We Only Do Positive’. As a result, The FA has seen positivity in grass roots football rise with 88% of tracked U12-U18s matches being played in a positive environment, a 2% increase from the previous season. The FA hope that the Pledge of Positivity will ensure that number continues to rise.

Make your pledge at HERE 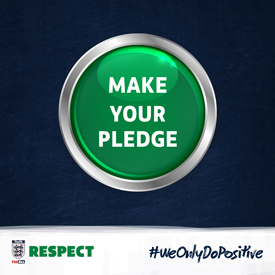