For most of us, football is just a fun escape. We spend an hour or two a week chasing a ball around a rock-hard bumpy field, giving us a chance to put life to one side for a while.

It’s the same with our kids, too. Whilst their imaginations probably stretch a little further than ours, and they can hear the roar of thousands when the ball hits the back of the net, playing the game is a chance to have some fun and make new friends.

Yet a select few will be given the chance to live out our dreams and bring those crowds to life by becoming a professional footballer.

Whilst there are the likes of Jamie Vardy – fairytale stories of players rising up the football pyramid to become Premier League stars against all odds – the majority of footballers these days have come through a club’s academy system, which means being spotted at an early age and graduating through the various youth ranks.

Of course, such are the vast youth intakes at clubs, that being scouted by a professional outfit is not a rare occurrence for kids in grassroots football and, when that happens, it’s hard not to have your mind filled with the possibilities that lie ahead should your kid make it to the top.

Yet a word of warning has come from Nick Marshall, the assistant academy director at Liverpool. 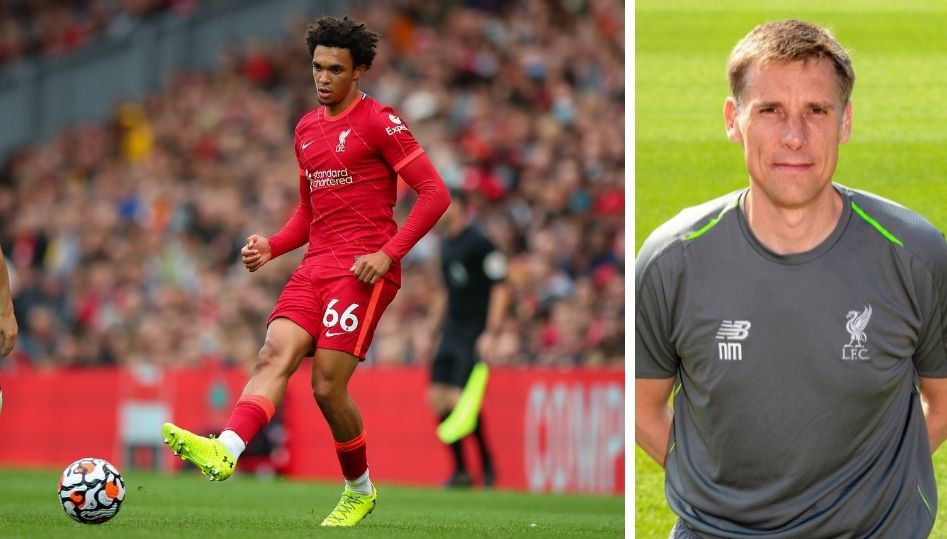 Nick spent 12 years at Nottingham Forest as academy director before moving to Liverpool in 2014, helping to oversee the development of the likes of Trent Alexander-Arnold and Harvey Elliott.

Speaking to Nottinghamshire Live’s Nottingham Forest podcast, Garibaldi Red, Nick revealed that clubs are signing players at a younger age than when he first started in the game.

Whilst that may see more kids given a taste of what life at a Premier League club is like, Nick believes the focus should still be on fun – and that means continuing to play grassroots football.

He explained: “Because of that move from signing boys at 14 to signing them at eight when they’re in the system from five, is that some of them barely play any grassroots football.

“We’re strong believers at our place that we’d love it if our under-9s, under-10s could still play grassroots football, play with their friends and still keep that social background.

“If clubs aren’t careful, the kids’ lives can revolve around the football, and if you have parents who are living the dream through their kids and putting the pressure on them, then that’s a recipe for mental health issues.

“We work really, really hard to make sure it’s not too professional too soon, I think it’s a worrying trend over the last 10 or 15 years.

“When I first started at Forest, we’d be signing boys and putting our under-9s and under-10s team together from grassroots locally and getting to know them as they played for us, whereas now those kids have already been with us for three or four years and have probably also been to Everton, Man City and Man United for three or four years.

POSITIVE ENERGY FOR ALL IMPORTANT REFEREES AND VOLUNTEERS

Whos the best Coach? Your Coach or Pep?

“So, if people aren’t careful, those kids can just be living the football dream when the reality is that so few of them are actually going to make it.

“So the overall diet those kids are getting at that age is, I think, a real problem. It could lead to some mental health issues down the line. I think we do a pretty good job of trying to allay fears any parents have around that by the way we interact with kids and by the way our programme is set up.”

The stereotype of a pushy parent is well known and sadly all too common in grassroots football, whereas the sport should purely be about making sure kids have fun.

Nick believes there is a place for a small amount of driven parenting in the world of academy football – but only if it is clear that the child is in a place where they can thrive with that sort of motivation.

Yet he insists the key focus for parents should be on making sure their child is still enjoying playing, even in an environment that is fiercely competitive.

He said: “I’ve got an eight-year-old who is a little bit like me in terms of he’s quite good at everything, but he’s actually very good at cricket.

“I’m so careful with him. He plays football as well and I hardly say anything to him apart from the odd thing every now and then.

“As a parent now, and I think it’s really important in terms of this job as well, something I’ve learned is that, since becoming a parent myself, I’ve had a lot more empathy with other parents.

“I’ve had run-ins with parents that now I get on very well with and I can empathise more with what they said and how concerned they were.”

He continued: “I think a parents’ job is to support their kid and make sure they’re happy. There’s got to be a realism about how tough and difficult this industry is but supporting a dream is good.

“I’d be lying if I said I hadn’t seen some parents who had been quite demanding with their kids, who have gone on to be successful, so I do think it’s individual to the kid.

“It’s not a one-size-fits-all approach to being a parent to your kid, but if they don’t enjoy it or they’re beginning to find it tough because of you as a parent, then I think you’ve got a massive problem because you’re not only going to stop them being footballers, you’re also going to potentially have problems down the road with them.

“So if you’ve got a kid who buys into it all and is so focused and you can push them a little bit, then that’s fine, as you know your kids better than any coach will do, but you’ve got to be careful and think really, really hard before you make that call.

“The key thing is to support the kid. The difficulty with football is that everyone’s an expert – everyone watches Match of the Day or listens to Gary Neville and Jamie Carragher and thinks they know more – and that’s different from other sports.

“When I take my kids to other sports, you don’t hear parents say a word because they don’t have a clue.”

Guest article by Mat Kendrick, author of the Kick N Mix Newsletter which you can sign up to below.

This website uses cookies to improve your experience while you navigate through the website. Out of these, the cookies that are categorized as necessary are stored on your browser as they are essential for the working of basic functionalities of the website. We also use third-party cookies that help us analyze and understand how you use this website. These cookies will be stored in your browser only with your consent. You also have the option to opt-out of these cookies. But opting out of some of these cookies may affect your browsing experience.
Necessary Always Enabled
Necessary cookies are absolutely essential for the website to function properly. These cookies ensure basic functionalities and security features of the website, anonymously.
Functional
Functional cookies help to perform certain functionalities like sharing the content of the website on social media platforms, collect feedbacks, and other third-party features.
Performance
Performance cookies are used to understand and analyze the key performance indexes of the website which helps in delivering a better user experience for the visitors.
Analytics
Analytical cookies are used to understand how visitors interact with the website. These cookies help provide information on metrics the number of visitors, bounce rate, traffic source, etc.
Advertisement
Advertisement cookies are used to provide visitors with relevant ads and marketing campaigns. These cookies track visitors across websites and collect information to provide customized ads.
Others
Other uncategorized cookies are those that are being analyzed and have not been classified into a category as yet.
SAVE & ACCEPT